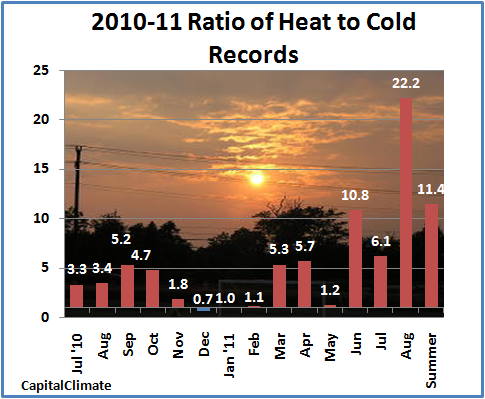 Steve Scolnik at Capital Climate analyzed the data from NOAA’s National Climatic Data Center and found that in August,”The over 3000 daily heat records swamped the 142 cold records by 22.2 to 1.”

I like the statistical aggregation across the country, since it gets us beyond the oft-repeated point that you can’t pin any one record temperature on global warming.  And 22 to 1 is a stunning ratio.  In the last decade, the ratio averarged about 2 to 1 — see “Record high temperatures far outpace record lows across U.S.”  As Scolnik writes, “For meteorological summer (June-August) as a whole, the ratio increased to 11.4 to 1 … and the year to date is now at 3.4 to 1, more than 50% above the average for the previous decade.”

The meteorological summer was the third hottest on record in the NASA dataset.  This is particularly impressive because we’ve been in a  La Niña most of the year and were headed back into one –  and that is normally associated with cooler global temperatures.  It’s just hard to stop the march of manmade global warming, well, other than by reducing greenhouse gas emissions, that is.

The “high-water” extremes this summer were record-smashing from Virginia, whose deluge was an “off the charts above a 1000-year rainfall,” to my hometown area around the Catskill Mountains, where Hurricane Irene was “the most devastating weather event ever to hit the region,” to Binghamton, NY, where “an extreme rainfall event unprecedented in recorded history has hit.” This is precisely what climate scientists warned would happen if we kept pouring  billions of tons of heat trapping gases in the atmosphere, heating the planet up and putting more water vapor in the atmosphere to be entrained into monster superstorms — see the scientific literature here: Two seminal Nature papers join growing body of evidence that human emissions fuel extreme weather, flooding that harm humans and the environment.

And, of course, there’s Texas to put the “hell” in “Hell and High Water,” a place where “No One on the Face of This Earth has Ever Fought Fires in These Extreme Conditions.” The National Climactic data Center has this stunning statistic on the severity of the Texas drought in its monthly “State of the Climate” Report: 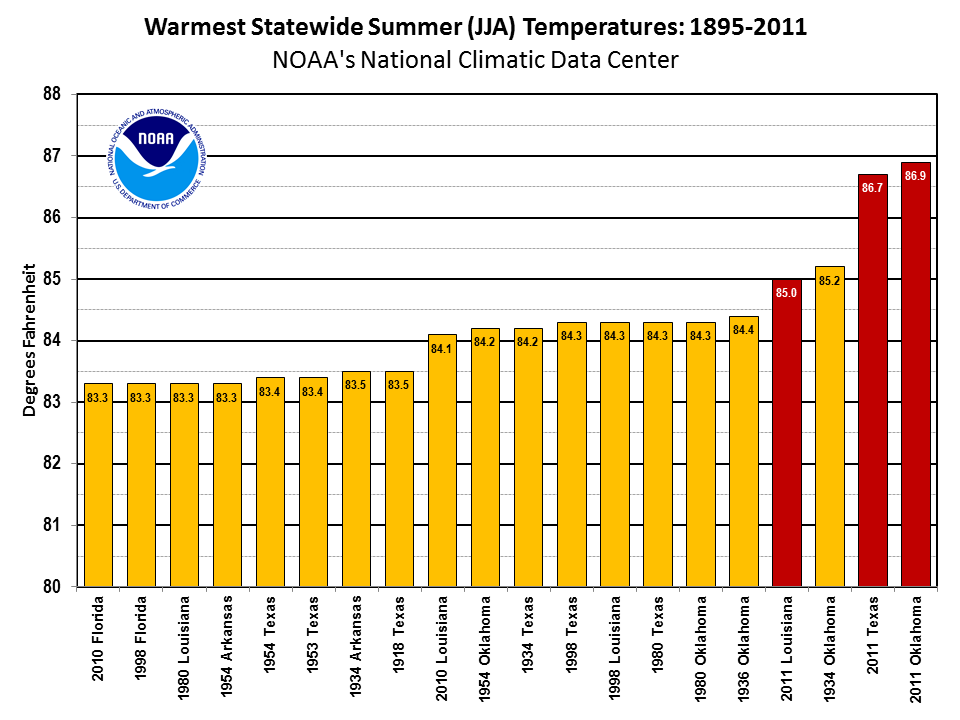 Climate Central has another way to look at how hot this summer was –  a map of days where the temperature hit 100°F:

I have talked to climatologist who think the contribution of global warming to this drought is higher, and I hope to report on that in the days to come.  Here is the most recent drought map –  which is about as ugly as it gets:

And what’s most incredible is that we’ve only warmed 1°F in the past 50 years.  If we keep listening to the climate science deniers like the current Governor of Texas, Rick Perry, we  could warm 10 times that this century.  In short, we ain’t seen nothing yet.