If CEOs hold the key to climate change, why aren’t they driving?

About two thirds of chief executives – 67 percent – believe that business is not doing enough to address global sustainability challenges, yet there has been a precipitous drop in the proportion of business leaders who described sustainability as very important, according to a just released survey of 1,000 CEOs by the United Nations Global Compact and Accenture.

It is clearer than ever that the private sector, in particular multinationals dominating the energy, materials and utilities industries, hold the key to addressing climate through action on sustainability. Another new report, issued by CDP and written by PwC, found that 50 of the 500 biggest listed companies in the world account for emissions of 3.6 billion metric tonnes, or 73 percent of total greenhouse gases (GHG). These emitters primarily operate in natural resources and energy.

In the CDP Global 500 Climate Change Report 2013, Malcolm Preston, global lead, sustainability and climate change at PwC, said the findings raise “questions for some organizations about whether they are focused on sustaining growth in the long term, or just doing enough to recover growth until the next issue arises…Corporate emissions are still rising. Either business action increases, or the risk is regulation overtakes them.” 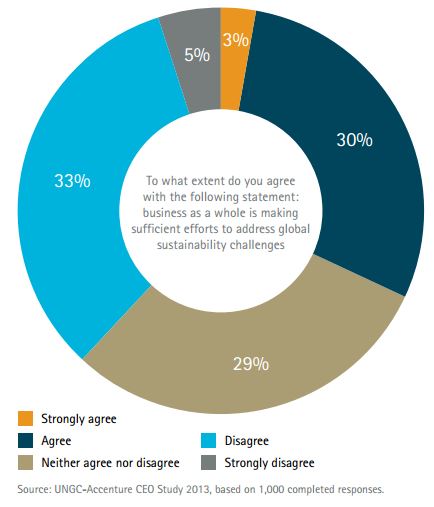 Meanwhile, the U.N. Global Compact-Accenture CEO Study on Sustainability 2013: Architects of a Better World found that 78 percent of surveyed CEOs see sustainability as a route to growth and innovation, and 79 percent believe that it will lead to competitive advantage in their industry. Paradoxically, however, CEOs see the economic climate and a range of competing priorities creating obstacles to embedding sustainability at scale within their companies, and the proportion describing sustainability as very important has fallen from 54 percent to 45 percent, including only 34 percent of CEOs in economically hard-hit Europe.

So we have a situation where businesses aren’t doing enough, yet the leaders of those businesses say they want to do more.

Put another way: The road to hell is paved with good intentions.

What needs to change to narrow the gap between intent and action? This is one of the fundamental questions of our time.

The answer to that question, according to the surveyed CEOs, is that we need better policies. Forty two percent of respondents listed governments among their top three stakeholders in sustainability, a rise from 32 percent in 2007. Eighty three percent thought more efforts by governments to provide the enabling environment will be integral to the private sector’s ability to advance sustainability. Specifically, 85 percent demanded clearer policy and market signals to support green growth.

Put another way: Pay no attention to that man behind the curtain. Because business lobbying dollars control politicians, CEOs are really just blaming policy makers for a problem that the CEOs – along with their investors and consumers – are creating and prolonging.

When asked which policy tools should be prioritized, 55 percent pointed to regulation and standards and 43 percent called for governments to adjust subsidies and incentives. A further 31 percent sought intervention through taxation. Softer measures, such as information and voluntary approaches, were supported by only 21 percent of CEOs.

Polite attempts were made in the authors of the U.N. report to pull back the curtain and place responsibility back on business.

“Business leaders should recognize that even in today’s imperfect markets, high performing companies do manage to combine commercial and sustainable success. These companies are harnessing sustainability as an opportunity for growth, innovation and differentiation, and demonstrate that sustainable business is good business,” said Sander van‘t Noordende, Group CEO, Accenture Management Consulting.

Added Peter Lacy, the study lead from 2007 to 2013, and managing director of Accenture Sustainability and Strategy Services, Asia Pacific: “To move from incremental to large scale transformation, businesses must accept that instead of persuading consumers about sustainability they must give them sustainable products and services they want at prices they can afford. And instead of showing investors the savings made from sustainability, the will have to demonstrate the positive business value it can generate.” 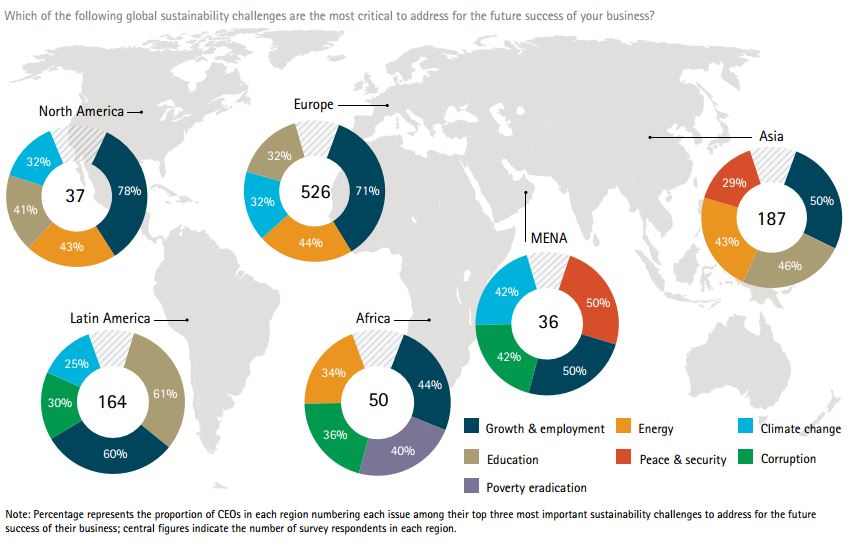 At the end of the day, with policy-makers in the clutches of business, the only meaningful change will come when CEOs, their boards, and their investors all realize that action today on climate and sustainability means long-term business success and mitigation against risk from resource constraints. And then upon that realization, use their power over policy-makers to make the changes they are asking for (not the other way around). The UN report found that although 52 percent of respondents see investor interest as an incentive for them to advance sustainability practices, only 12 percent of respondents see investor pressure as a leading motivator. Nevertheless, only a small minority of CEOs (15 percent) blame the short-termism of financial markets as a barrier, and 69 percent believe that investor interest will be increasingly important in guiding their approach.

The crucial role of business is one of the underlying themes at next week’s fifth ClimateWeek NYC. I look forward to hearing from CEOs who are turning intent into action.

Image of keys by StockThings via Shutterstock

William Brent is executive vice president at Weber Shandwick and head of the global firm’s renewable energy and cleantech practice.