“Regional Foresight 2.0” Launched by the European Nodes of The Millennium Project 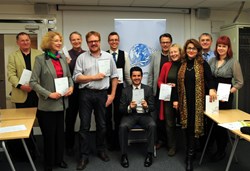 The Foresight 2.0 program will foster research for innovative and creative components in a new generation of foresight in general, and europe specifically.

The ERFC launched a new program, called ‘Foresight 2.0’, aiming to initiate a new generation of foresight. It would be composed of three experiences based on projects conducted between 2009 and 2011: San Sebastian (Spain) with the Gipuzkoa experience; Genval (Belgium) with the foresight experience of Wallonia; and Ljubljana, with foresight in the Danube region. The outcomes of these three studies were published in the book “Regional Foresight 2.0 experiences”, which was launched during the Warsaw meeting, and can also be downloaded from the ERFC website: http://www.foresight-college.eu/spip.php?article83. “The Foresight 2.0 program will foster research for innovative and creative components in a new generation of foresight in general, and europe specifically,” explains Ibon Zugasti, President of the European Regional Foresight College.

Presentations given by representatives of the European Nodes of The Millennium Project and a special presentation of national and territorial foresight projects in Poland, by 4CF, the Polish strategic foresight company can be obtained by contacting Ibon Zugasti at email: i.zugasti(at)prospektiker(dot)es.

The second day of the meeting was hosted by the University of Warsaw on the occasion of the 19th COP Climate Conference, with contributions from ERFC/EuMPI participants and with attendance of Polish researchers and officials from regional and central institutions. A keynote presentation from the United Nations Global Compact national representative offered interesting insights into new UN forward-looking initiatives bridging business and public sectors. The agenda of the workshop included presentations about the EU2020 strategy, and a roundtable on addressing climate change with appropriate foresight activities, with contributions from leading European foresight experts. The discussions that followed revealed the enthusiasm of the Polish foresight community to further link with European colleagues to foster a culture of quality foresight in Poland.

The next meeting is planned for the 2nd quarter of 2014, in Brussels, and is meant to engage representatives from EU institutions in the broader context of promoting and rising awareness for quality foresight.

The European Regional Foresight College was founded on April 1, 2004, at the initiative of the Land Planning and Regional Action Delegation of the French Republic (DATAR). The general objectives of the European Regional Foresight College are to create a community of competencies, concepts, methods and practices in regional foresight, to organise a European network in order to monitor and to discuss foresight practices and developments in the European regions, and to contribute to the collective learning of all regional actors through the development of foresight competencies, by providing all partners with information about high-level European foresight experiences. The first years of the ERFC were dedicated to drawing up a foresight glossary. Since its foundation, it has organised a dozen of seminars in Paris, three residential seminars in Etiolles (Evry) and contributed to two Foresight Summer Universities in Lille. Since 2009, the European Regional Foresight College has adopted the legal status of an NGO.

The Millennium Project is a global participatory think tank connecting about 50 Nodes around the world that identify important challenges in their regions, and initiate and conduct futures-related special research, workshops, symposiums, and advanced training. Its mission is to improve thinking about the future and make it available through a variety of media for feedback to accumulate wisdom about the future for better decisions today. It produces the annual “State of the Future” reports, the “Futures Research Methodology” series, the Global Futures Intelligence System (GFIS), and special studies.