1.  Methane plumes from the arctic.  This precursor event has a high probability of rapidly accelerating the timeframes for climate change impacts and increasing them to much more devastating levels.

2.  Oysters shells dissolving on both coasts because acidity levels are already too high from climate change.

Just a week into the sampling program and SWERUS-C3 scientists have discovered vast methane plumes escaping from the seafloor of the Laptev continental slope. These early glimpses of what may be in store for a warming Arctic Ocean could help scientists project the future releases of the strong greenhouse gas methane from the Arctic Ocean.

”This was somewhat of a surprise,” writes chief scientist Örjan Gustafsson, Stockholm University, in his latest blog entry. He speculates that the leaking methane from the seafloor of the continental slope may have its origins in collapsing “methane hydrates,” clusters of methane trapped in frozen water due to high pressure and low temperature.

The discovery was made while the icebreaker Oden crosscut the Laptev Sea along a depth gradient from 1000m to just 100m following the continental slope upward to reach the shallow waters of the outer Laptev Sea Shelf. By use of acoustic techniques and geochemical analyses of water samples, the scientists found vast methane plumes escaping from the seafloor at depths between 500 m and 150 m. At several places, the methane “bubbles“ even rose to the ocean surface. What’s more, results of preliminary analyses of seawater samples pointed towards levels of dissolved methane 10-50 times higher than background levels.

“While there has been much speculation about the vulnerability of regular marine hydrates along the continental slopes of the Arctic rim, very few actual observations of methane releases due to collapsing marine hydrates on the Arctic slope have been made,” writes Örjan Gustafsson.

Örjan Gustafsson thinks that the mechanism behind the presence of methane seeps at these depths may have something to do with the ”tongue” of relatively warm Atlantic water, presumably intruding across the Arctic Ocean at 200-600 m depths.” Some evidence have shown that this water mass has recently become warmer. As this warm Atlantic water, the last remnants of the Gulf Stream, propagates eastward along the upper slope of the East Siberian margin, it may lead to destabilization of methane hydrates on the upper portion of the slope. This may be what we are now seeing for the first time,” writes Örjan Gustafsson.

Mapping the bottom of the deep ocean

SWERUS-C3 scientists could determine the depth from which methane plumes were bubbling up with the help of precise sonar instruments commonly used to map the bottom of the deep ocean and detect gas seeps in the water column. ”We mapped out an area of several kilometers where bubbles were filling the water column at depths of 200 to 500 m,” writes Örjan Gustafsson. Additional observations include the discovery of over 100 new methane seep sites in the shallower waters of the Laptev shelf (at 60-70m depth), a likely consequence of the thawing subsea permafrost.

”SWERUS-C3 researchers have on earlier expeditions documented extensive venting of methane from the subsea permafrost system to the atmosphere over the East Siberian Arctic Shelf,” writes Örjan Gustafsson. He continues: ”On this expedition we have gathered a strong team to assess these methane releases in greater detail than ever before to substantially improve our collective understanding of the methane sources and the functioning of these systems.”

Örjan Gustafsson believes such data to be crucial for making scientific predictions of how the release of methane from the seafloor of the Arctic Ocean may take shape in the future.

Marine industries at risk on both coasts as oceans acidify 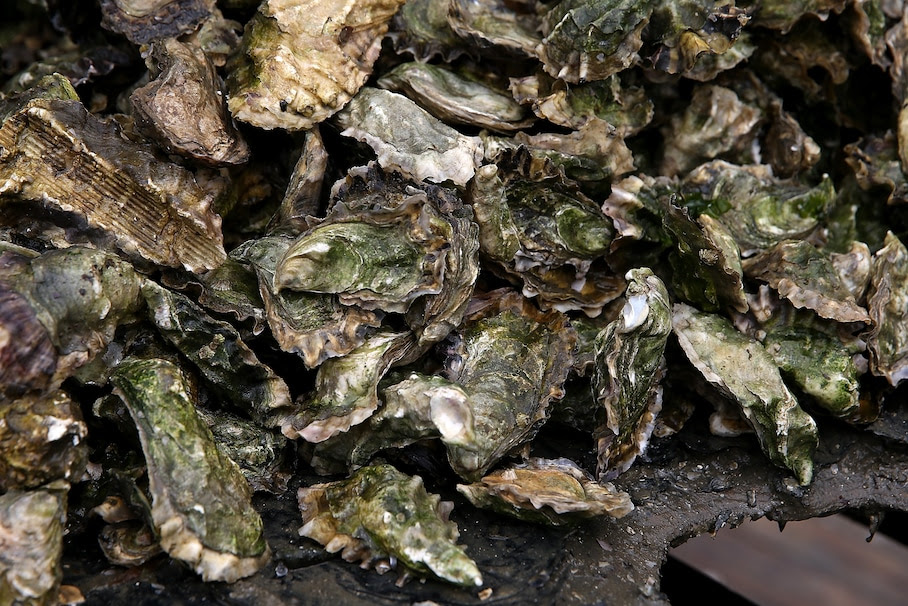 QUILCENE, Wash. — For more than a century, Bill Taylor’s family has used the calm, protected waters of Puget Sound to raise oysters, planting billions of larvae in underwater beds and then harvesting them to ship to some of the finest restaurants in the world.

But then something went wrong. After the hatchery produced peak levels of 7 billion larvae in 2006 and 2007, the numbers began to drop precipitously. In 2008, it had half as many larvae. By 2009, it produced less than a third of the peak.

Up and down the Pacific Coast, from California to British Columbia to Alaska, other shellfish farms experienced the same decline: Something was happening to their larvae at the formative stage of life when they build their shells. No one in the industry knew why.

“We didn’t know that much about the water because we didn’t have any problems,” Taylor said. Once the larvae started dying off, they tested the water and found an answer: It was much too acidic.

Scientists testing the water up and down the Pacific Coast found evidence of the same steep decline in pH. Studies have found that more acidic water in Alaska is stunting the growth of red king crabs and tanner crabs. Plummeting pH levels across the Eastern Seaboard have been impacting the shellfish industry for decades.

The economic impacts of rising acidity can be devastating. At its peak in 1952, U.S. producers harvested 72 million pounds of eastern oysters, according to data collected by the National Marine Fisheries Service. In 2012, the last year for which data is available, farmers hauled in just 23.8 million pounds. Producers haven’t harvested more than 30 million pounds since 1996.

In a new study published online in the scholarly journal Progress in Oceanography, a team of scientists from the National Oceanic and Atmospheric Administration found rural areas in southern Alaska are at high risk of losing hundreds of millions of dollars in commercial and subsistence fishing stocks. Declining seafood harvests will impact about 20 percent of Alaska’s population, which relies on subsistence fishing for significant amounts of their diet, the NOAA report found. 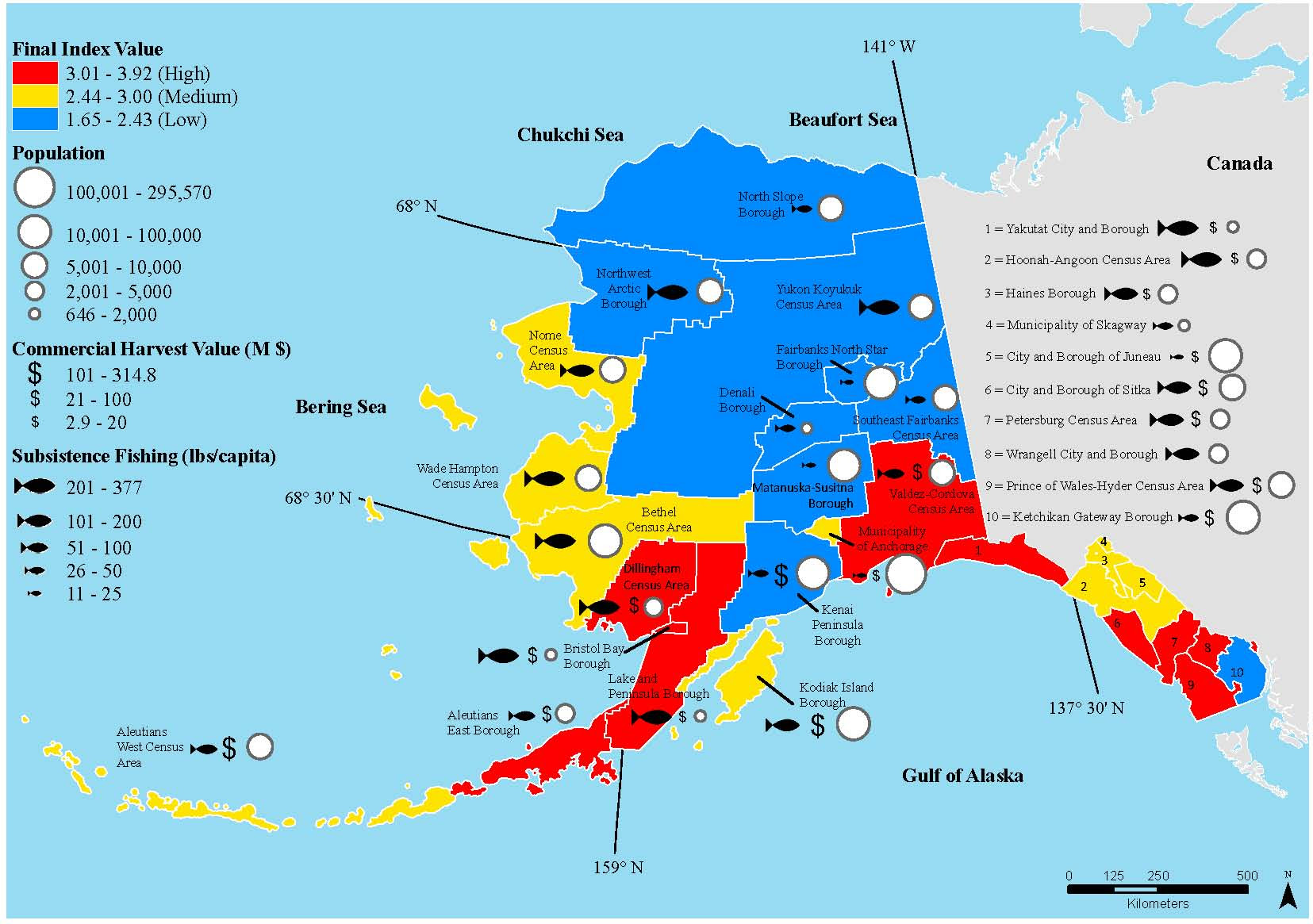 Acidification happens as a result of increased carbon in the atmosphere. The top layer of the world’s oceans, perhaps the first 100 meters, absorb the elements in the atmosphere. The more carbon, the more acidic the water becomes. Currents take that layer of surface water and plunge it into the depths of the Pacific; decades later, the water is forced back to the surface as it reaches the West Coast, a process scientists call upwelling.

Because it takes so long for water to move from surface to bottom to surface, acidification is a kind of window into the past — and a preview of the future. The upwelling happening on the West Coast today is water that last mixed with the atmosphere in the 1950s or 1960s, when far less carbon was being spewed into the atmosphere. In 50 to 100 years, when water mixing with today’s atmosphere upwells, the water will be even more corrosive.

“This bad layer is getting thicker and thicker,” Benoit Eudeline, who oversees the nursery for Taylor Shellfish in Quilcene, said of the water in Puget Sound that the hatchery treats. “People like to use the word ‘tipping point.’ ”

The dramatic changes to oyster farms in Washington, Oregon and California are only the beginning steps in what could be a systemic disturbance in the ocean ecosystem, a process that will only accelerate as more-acidic water upwells in the coming decades. The last time the oceans changed so dramatically, about 59 million years ago, during a geologic time known as the Paleocene-Eocene Thermal Maximum, the rate of change was 10 times slower than is occurring today.

“We’re leaving that in our wake when you compare it to the rates we’re looking at today,” said Mark Green, an oceanographer and shellfish farmer at St. Joseph’s College of Maine.

Today, during the height of the summer upwelling season, as much as 30 percent of the water on the West Coast has a pH low enough to be corrosive, said Richard Feely, a senior scientist at the National Oceanic and Atmospheric Administration’s Pacific Marine Environmental Laboratory and the University of Washington. By 2050, 50 to 70 percent of the water will be corrosive.

On the East Coast, instead of upwelling, acidification is a result of nutrification — adding nutrients like agricultural waste, fertilizers and waste water treatment facilities. The Chesapeake Bay, which receives runoff from one of the most densely populated watersheds in the United States, is acidifying three times faster than the rest of the world’s oceans. Long Island Sound, Narragansett Bay and the Gulf of Mexico are all showing signs of rapid acidification.

And just like on the West Coast, the increasing acidification shows up first in oyster harvests.

Eudeline shows off the complex system that neutralizes the acidity, a carefully monitored filter system keeps the pH of the water flowing over larvae at a healthy 8.2. He turned off the filter, letting untreated sea water into the tanks. Within seconds, the pH plunged to 7.6. He turned the filter back on, before it could fall any farther. Oysters subjected to water with a lower pH — that is, more acidic water — cannot form the calcium carbonate shells they need to survive.

The impacts go far beyond oysters and crabs. In a paper published in April in the Proceedings of the Royal Society B, a team of scientists from the National Oceanic and Atmospheric Administration said it had found evidence that acidification is dissolving the shells of pteropods, tiny free-swimming marine snails, off the West Coast. Pteropods are a staple food source for salmon, mackerel and herring. When one food source disappears, the impact is felt up and down the food chain; fishing industries based on the West Coast could see their stocks move away in search of food.

Acidification means the threads that mussels use to hold onto rocks don’t stick as well in low-pH environments. Bivalves searching for muddy ocean floors to settle upon are moving away from acidic coastal fields into deeper, less accessible water. Low-pH environments make clownfish more aggressive, and therefore more vulnerable to predators. Across the world, corals are dying at an astounding rate; they may be completely gone by 2070.

“You can’t deny it. It’s not based on these elaborate mathematical models,” Green said of the impacts of ocean acidification. To deny the evidence, he said, “is like saying you don’t believe in gravity. It’s not speculation at all.”

What scares scientists the most about the increasingly acidic oceans is that there is no obvious solution. Acidity can be mitigated in some localized areas by spreading crushed-up shells, and fields of sea grass can take some carbon out of the ocean. But those are localized solutions. Even if man flipped a switch and turned off every carbon-emitting machine on Earth, the higher-carbon water moving toward the Pacific Coast would mean oceans will continue the march toward acidity for the next century at least.

“There are no switches we can flip at this point,” said Michael “Moose” O’Donnell, senior scientist at the California Ocean Science Trust.

In the long run, O’Donnell said, the carbon in the oceans will be reduced by things like rock weathering, when higher-pH particles balance out the low-pH carbon. But long run, in geologic terms, means tens of thousands of years.