Sreenivasan pointed out that online courses themselves are certainly nothing new to Columbia. In fact, he noted, students can already “get 14 master’s degrees from our engineering schools without setting foot on campus.”

But interest in MOOCs is soaring.

Sreenivasan said, “I don’t think any piece of technology has gone as quickly through academia,” citing the explosive growth of Coursera, Udacity, edX, and Khan Academy. But MOOCs are only “a tiny part of what is going to happen to MOOCs are still brand new and their story has yet to be told. “Anyone who says they’ve figured this stuff out is wrong,” Sreenivasan remarked. And, he continued, “Anyone who condemns it is wrong. And anyone who says it’s the salvation of the world is wrong.”

See also “A New Seat in the C-Suite: Chief Digital Officers Find a Place on College Campuses” (via EdTech)

Hewitt agreed that when it comes to open online courses, “the interest is tremendous—and the The panelists discussed other issues too, including how the roles of university CDOs vary widely. Sreenivasan’s scope is almost entirely academic, but Hewitt’s brief is broader and includes strategy, systems, and figuring out how to position Harvard to the public.

Hewitt told the audience that, in her role, being a CDO means doing a lot of thinking about “How does Harvard tell its story online?” The faculty and students at Harvard, she said, represent “thousands of thought leaders,” and “we Whatever she does, Hewitt wants it to be “Harvard quality with BuzzFeed agility.”

Rodriguez, as a CDO at a for-profit enterprise at Kaplan Test Prep and Admissions, has a broader and more populist perspective on the impact of online courses on education. 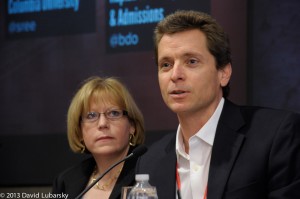 There are about 60 million students in the K–12 grades in the U.S., and 1.4 billion in the world, Rodriguez noted. It’s an area with great potential for digital learning because, as he explained, kids are tech savvy, teachers are passionate about teaching their students, and there is no lack of ideas or of entrepreneurs who want to step in.

But, he added, entering the K–12 market is a difficult challenge.

“The barriers to entry are hard. There’s the budget cycle, sell cycles, and legacy systems to deal with.” Because of these hurdles, Rodriquez says that any Rodriquez also remarked that he sees real potential for online courses to provide positive changes for vocational students. “Most people in this country go to college to get a job,” he said, but they end up doing work in a field that does not require a college degree. These students are not getting what they wanted, and so for them, “the system is broken.”

The advantage of digital learning is that it allows “unbundling” of courses to build a targeted curriculum, thereby offering visibility to particular – by Robert Berkman, exclusively for the CDO Club

A selfie by Perry Hewitt and Sree Sreenivasan

Sree Sreenivasan and Perry Hewitt will be presenting a “Digital Duet” keynote at the upcoming CDO Summit on the topic of “Digital Transformation in the Arts and Education.”

Tickets to the next CDO Summit are available now. The SOLD OUT of tickets, weeks before the summit date, so be sure to reserve your place now.