SunEdison is not Solyndra: Why 2016 Looks so Different from 2011

In a move that appeared inevitable for months, commercial-scale solar pioneer SunEdison filed for Chapter 11 bankruptcy protection on April 21. The news grabbed clean-tech industry and general business headlines for sure, but I’ve been struck by how little splash it’s made in the broader realm of national attention, particularly politics. The contrast with the partisan uproar that immediately arose after the 2011 bankruptcy of solar startup Solyndra could not be more striking.

In 2016, an even more contentious presidential election is underway… [read more]

We are currently preparing the mid-May release of our 2016 U.S. Clean Tech Leadership Index, which tracks the clean-tech activities of all 50 states and the 50 largest metro areas. The 2016 state and metro rankings will feature more insights than ever before, with the addition of: energy efficiency spending and savings; total distributed solar generation; ACEEE metro scorecard scores; metro commitments to reducing electricity use and shifting to 100% renewables; and more. 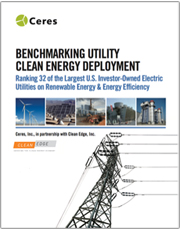 Contact us to learn how your organization can partner with Clean Edge on either of these widely cited and trusted publications and how to access the complete datasets.