“Ethical Markets recommends this article on a leading circular economy company ECOR, which leads in upcycling all kinds of waste streams into such useful new products pictured in this article.  For full disclosure, Hazel Henderson serves on ECOR’s Advisory Board, along with famed architect William McDonough, who has accredited ECOR with its Cradle2Cradle certification.

ECOR’s Recycling Plans Are Something That Company Can Build On 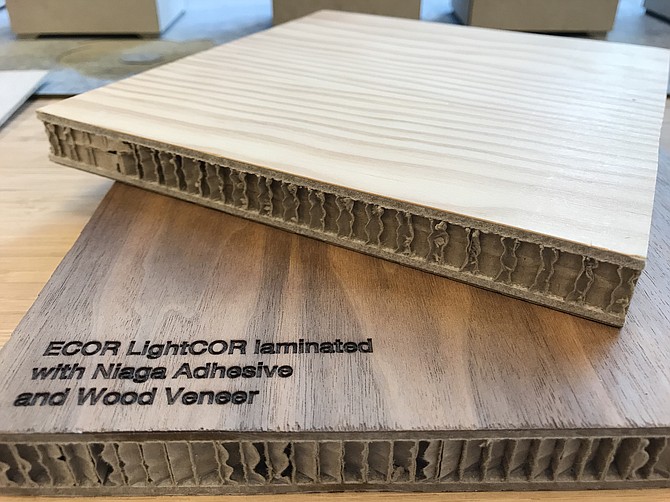 Before, San Diego used to send the majority of its recycling to China, where it would be spun up into raw materials that could be manufactured into goods. But earlier this year, China cut down on imports, leaving cities scrambling for a solution.

After China dramatically cut the amount of recycled material it would accept, municipalities’ problems began to pile up. San Diego, for example, previously exported the majority of its recycled goods to China. Now what to do with all of that trash?

ECOR, a San Diego-based startup, invented a method to turn one company’s trash into another company’s building materials.

“We’ve got a lot of people, and a lot of trash. It has to go somewhere,” Potter said. “Everybody now is doing the math: What is the cost of environmental damage? What we’re addressing is part of that.”

ECOR is able to take everything from recycled paper, cardboard, coffee grounds, even spent beer grain, and turn them into new paper products and building materials. For example, instead of making particleboard out of wood chips and glue, the company simply uses water, heat and pressure to turn the plant fibers into a recyclable material.

Instead of manufacturing all of the recycled materials onsite, ECOR licenses out its technology. “The solution is really scalable. It doesn’t require a lot of infrastructure,” ECOR President Derek McSpadden said. “When we’re talking to municipalities, or island countries, it’s a solution for pretty much anywhere.”

Christopher Gann, an investor in the company and former vice president for the Dow Chemical Co., joined ECOR’s board after it made the shift to its licensing strategy. “We believe that our strategy will allow us profitable growth and that our focus on delivering results for our licensing partners will make ECOR the material of choice for building products, furniture, print and packaging in the not-so-distant future,” he said in a news release.

ECOR recently launched a research partnership with DSM-Niaga, a Netherlands-based company focused on sustainable materials. The company also has been working with Heineken to produce corrugate out of recycled materials from the company’s waste-stream.

Potter said the company plans to use the additional funds to hire more people, scale up ECOR’s technology and sign licenses for more facilities. The company hopes to reach profitability next year, and surpass $100 million in revenue in three years.